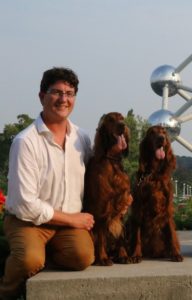 „I have been involved with dogs since 1977 and always Chesapeakes. I have bred 186 AKC champion Chesapeakes as well as 145 performance titled Chesapeakes including AKC field trials. I have personally trained & titled dogs in conformation (group wins and SS wins), obedience (all levels) and hunt tests to SH level. I have edited a book on Chesapeake Bay retrievers and have given numerous seminars here and abroad. I have authored articles on the Chesapeake in numerous magazines.

I have judged Chesapeake National Specialties in the US, England, Germany, Sweden, & Czech Republic. At one time I also judged AKC hunting tests at the Junior level and have judged other field events for retrievers as well. Approved to judge all AKC Sporting breeds and in 2015, I judged at the Westminster Kennel Club. My philosophy is that dog must look like it can function for its breed’s purpose within the confines of its standard. Movement must be sound and functional for its purpose as well but it must be typey for its breed too. I judge on a total dog with emphasis on abundance of positive virtues rather than an absent of flaws.
For the American Chesapeake Club I have served in numerous positions-historian, club secretary, chair of Judges Education, Judges Education Coordinator, and AKC Delegate.“
Dyane Baldwin